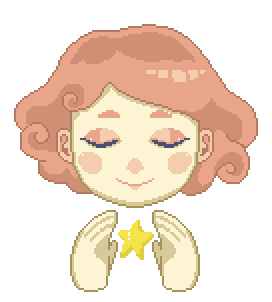 Looking for a taste of magic?

Help her improve her store, serve the - sometimes strange - customers and expand her menu with the power of magic (and hard work!)

A game by Smarto Club. Thanks for playing! Gameplay video.

I think this game needs new things, and things should be "fixed", like, everything costs the same thing, 10 "coins", and I think that can change, and add new npc's, things like that, but the game is wonderful, I really liked it, I just think I could change some

Very cute and fun game! However, I'm unable to see the prices of the small tables? I want to know how much I need to save in order to get them. Other than that no complaints. 9/10.

Oops, that's something we didn't manage to fix for the jam version. All of the small tables cost 300. Thanks for playing!

Hi, for some reason the full screen won't work?

Hiya, works fine for me on Firefox and Chrome, but we'll look into it!

and this is the shop areas, 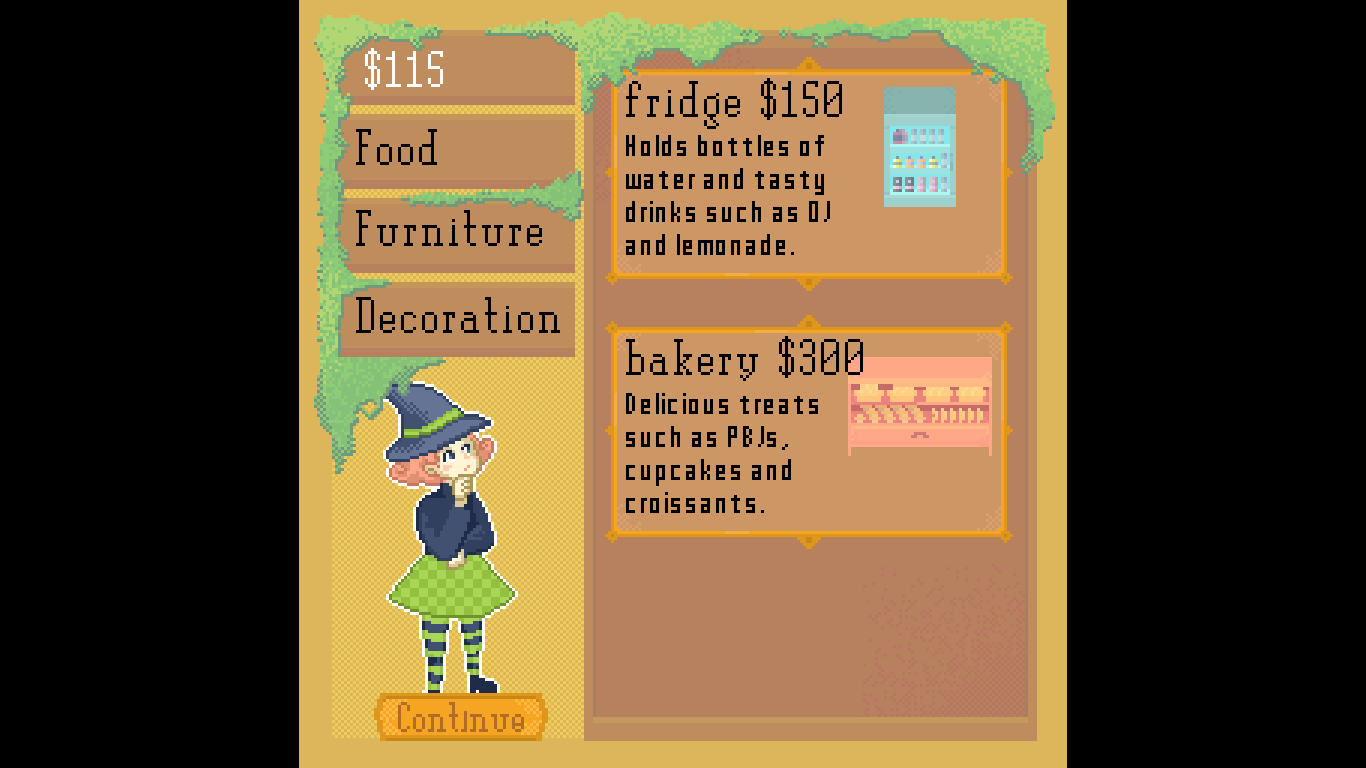 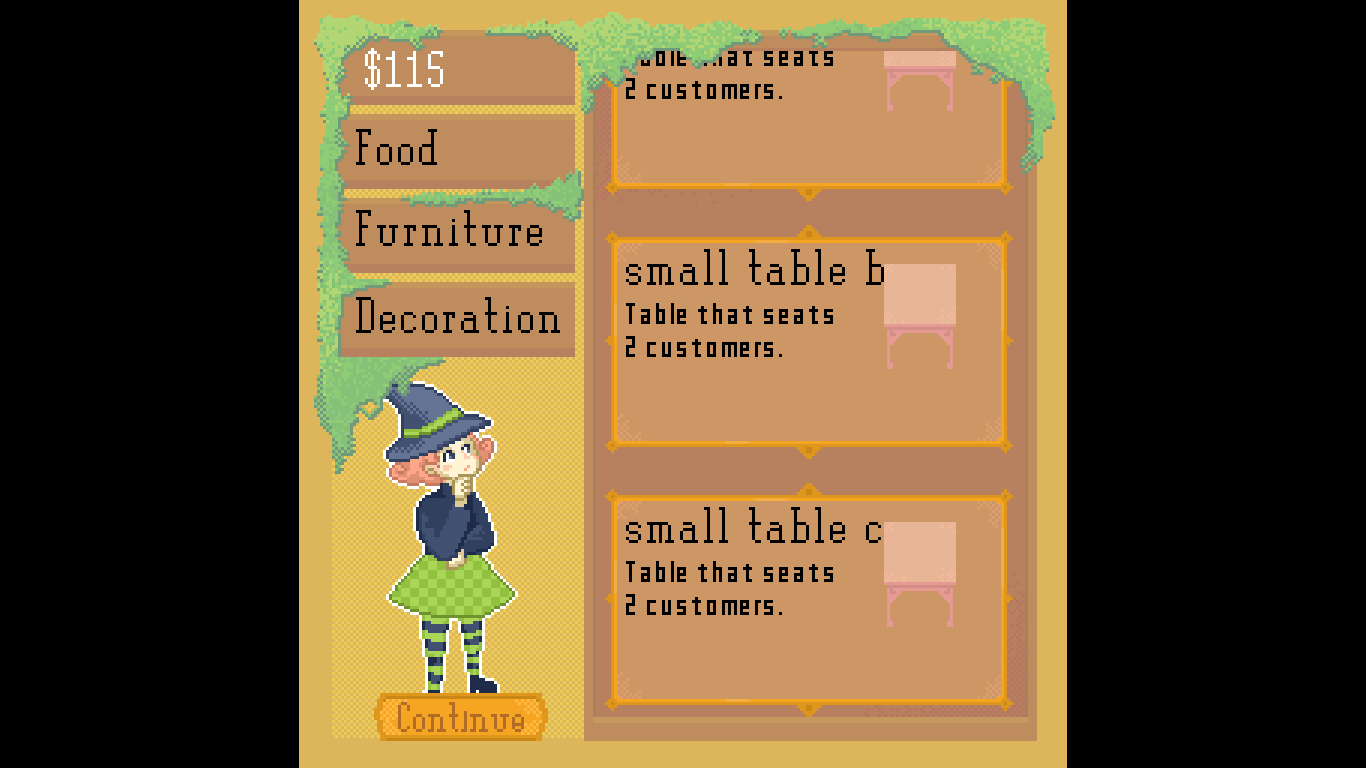 is this a glitch, does it unlock later in the game, was it removed or coming in a later update? sorry for any comment clogging ;-;

Edit: i have bought everything that i have been able to buy and have scrolled as much as i could on each menu, nothing new has appeared above the seeable part of the menus

Wow, thanks for playing the game so extensively! We made this game in a weekend for a game jam, so there was some art that we made but did not manage to add into the game. Sorry for the misleading screenshots!

Thanks so much for the video :D

it seems fun, its just not my type of cafe game

Thank you so much for making a video!

But did you watch it?

I still find myself playing this game. It's very chill. Though, like other people suggest, it can use some polish. No complains though, it does indeed get hard making a game in a short time frame. All in all, good job and keep doing what you're doing!

The art is nice. Especially the little windows are very clever. You're clearly visually oriented.

But you need to improve how you give players feedback.

Although the art was cute, the playing experience for me was unpleasant because of UI faults. The player is left guessing what they should do. Sure, there's instructions, but the last time I read a manual was 20 years ago.

Instead, consider giving contextual instructions. Always show what the player can do at a given point. It felt very odd that the stove reacted as there was no indication that it could be interacted with.

You should consider general usability better. If you require players to read a manual outside the game, make it easy to jump in and out of the game. I found no way to get back to the game once I exited full screen and because the browser reacts to arrow keys, the game was unplayable from that point.

I feel really calm when playing this game, and it's very cute. Thank you for making my quarantine better, though I'm sure I'll keep coming back to this even after this whole thing haha

Thank you very much, hope you're safe :D

Aww thanks, we hope to keep improving the game while keeping the calm aspect mind. Hope you're safe too!

I wish you could download it :) I would certainly download it I loved the game great graphics and really enjoyed the music: 3 I love witch stuff; -;

That's interesting to know, thanks for telling us, we'll remember it for the next update!

Really love the art and music! What a charming and endearing concept as well, with adorable animations to boot!

It takes too long to get meaningful upgrades as they're too expensive and a coffee only gets me $10 per order. So at the start I need to grab, carry and repeat the same order at least 5 times. And if I get the door mat first , I have to do the same order about 10-15 times again.

Once I get the fridge, I have to make the same coffee order, I have to do roughly 30 more coffee orders until I get another meaningful upgrade. Even more time if too many people order the $5 water as well.

So it feels like it's taking forever to buy things in the shop, get more variety and progress in the game. Progress for such a mechanically simple game should feel faster in my opinion.

About the shop, since most of the game is played on the keyboard having the shop ONLY navigable with a mouse feels a bit awkward. Also, the first upgrade  you see when you first get the shop is the door mat, which doesn't do anything as far as I can tell. I don't think it should be the first thing players see in the shop, cause then most (including myself) will naturally buy it first, and it'll take longer to reach their first meaningful upgrade.

Also, bringing up the water  again. Why should I bother to serve that? I honestly never served any water at some point since it was a waste of time and there is no consequence to not helping customers. Nothing happens if I get the wrong order even. Why serve the $5 customers when I can only focus on the $10, $15 and above :p

I think it would be cool if the text bubble of the order starts out with layer of green on top of the art, and as time goes by, it diminishes, then turns yellow and finally turns red. And if enough time goes by, they use a spell to turn you into a frog or something. (It IS a magical cafe after all :P)

It probably wouldn't be too detrimental, since the game is going for a more relaxed tone.

If you get multiple greens in a row though, you get some tips and a multiplier, so more money if you do really well though!

I think it would be really cool if customers interacted with each other more and the player could maybe even interact with them. Would make the cafe feel more alive and building relationships with the customers is something that I think would fit the feeling of a magical cafe the game is going for.

A few last notes are to have the player move slightly faster and diagonally, so I don't feel so dang slow. Also, to have some "waiter's tray" upgrades so I can carry more than one order at a time later as there are more varieties on the menu and I don't have to keep walking back and forth.

Oh, and sometimes customers just seem to get stuck at the door for some reason? I don't know why :P

Sorry for the long review, but I only did it because I found this game really charming and wanted to give feedback so it gets even better! I just hope you find it helpful at least.  XD

I hope you work on it more and expand it! :D

Wow, thank you so much for the detailed feedback! We spent so much time testing with unlimited money that we didn't realize the game was so grindy, so we'll definitely work on that. All of your ideas are great, so we'll definitely take them in account for future updates to make the game as fun as possible. Thanks for playing!

PS: the customers getting stuck is a bug that came up in the last hour of the jam so we didn't manage to fix it :p

It's a really wonderful game with cute graphic, music and art! Just really hope that we can make multiple orders at the same time and serve our customers haha.

Glad to hear you enjoyed it! Multiple orders sounds great.

Cute as heck! I love the art.

Super cute art!!!!! Love it.  Didn't understand the animation that played after selecting coffee though - it looked like cutting cake, flipping pancakes? Not sure if that was meant to play.  Also, do they ask for anything other than coffee?  Again, love the art though!

After selecting some food the animation is meant to play, but we didn't have time to do individual animations (a coffee pouring animation for example) so we just play random animations in that case.

To unlock more food you have to buy the fridge or the bakery! Once you have that people will ask more variety. 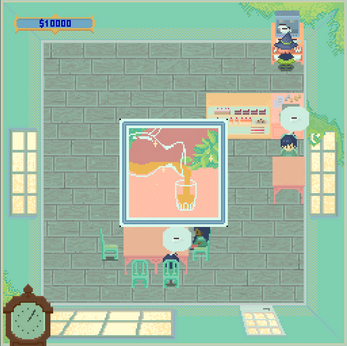 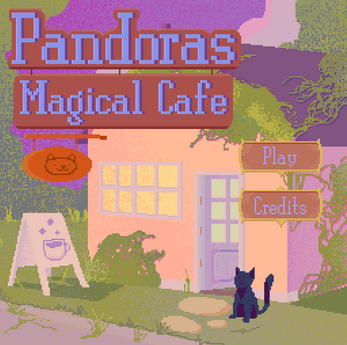 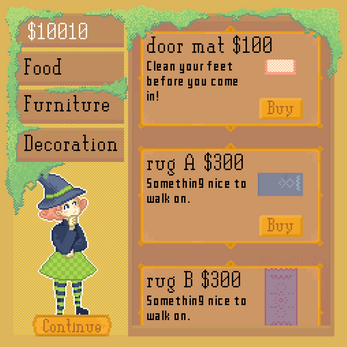 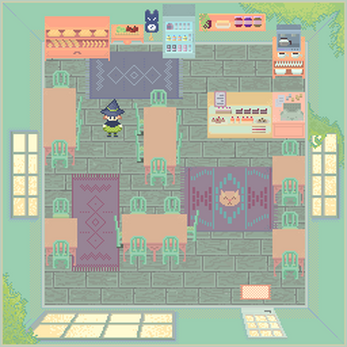 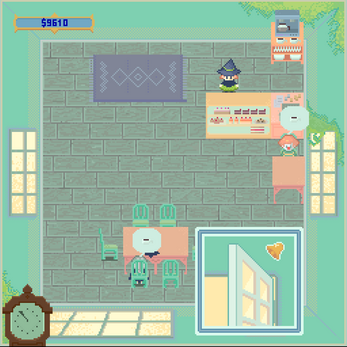